This whole astro-photography thing is a pain in the cheeks at times. There I was sat in the cold with the telescope last night, tripping over wires in the dark, cursing the GOTO for not being spot on and finally chucking it all in after 30 minutes because the wind was an even bigger pain and it was impossible to get anything worthwhile at all.

I was this close → ← to chucking the whole lot on Gumtree and packing it in totally. Such was the severity of the huff. Thankfully I didn’t but what it’s taught me is not to attempt this stuff when the conditions aren’t perfect.

Less than perfect conditions though don’t stop you having some fun with a nice clear sky, never mind how windy it is and the even better news is that you can do this stuff with some nice basic photographic gear; this post from here on will be a telescope free zone!

All you’ll need is a camera you can control the exposure on (variable zoom will help too), a tripod and a remote control for the camera or at least one with a self-timer. The hardest part is getting the clear sky but even the odd cloud can add to a shot as long as your intended target is still visible.

To demonstrate what’s easily possible, these 4 shots were taken in central Edinburgh, in light pollution with a Nikon D90 fitted with a Nikon 18-200mm VRII lens.

The technique is simple enough, keep the ISO fairly low, around 400 to 640 otherwise the light pollution will run away with your shot. Exposure times will vary maybe from less than 1s in the case of a planet to a few seconds on a star cluster, even as long as 30s on a wide field shot. The whole idea is to get enough light in to give you the shot but avoid stars trailing to get a decent shot.

Finding interesting targets is your next challenge. The sky just now is best after midnight and even with the moon out the way there’s some nice stuff you can get. After midnight the Pleiades open star cluster will be getting higher in the sky and below it will be the brilliance of Jupiter, a nice photo opportunity, especially if you can include some ground interest to give some perspective.

The Pleiades itself is a very nice target and fills the frame nicely at nothing more than 200mm. Keep the exposure shorter when you’re zoomed in like this. The diffractions spikes on this shot were added in Photoshop with a plug-in, it’s not the natural look!

Sticking with 200mm try Jupiter as well! You’ll really need a shorter exposure with the planet so bright take a few at differing exposures and you should also be able to pick up the planets moons.

Winter skies usually provide the best targets but at this time of year you can also get the summer triangle, an easily visible triangle of the very bright stars Vega, Altair and Deneb.

Light pollution needed be a killer but if you do get a chance to get out under really dark skies you might be lucky enough to catch this, the fabulous sight of the Milky Way rising in the sky above…

One thing about Astro-photography, you’re totally at the mercy of the weather. No matter what’s going on in the night sky, you can only see it if the clouds let you see it. There’s nothing you can do about it other than cross your fingers and hope that as darkness falls the skies clear. Which predictably they don’t 9 times out of 10. The conjunction of Venus and Jupiter last month being a perfect example. The night the 2 planets were at their closest in the sky thick cloud hung about all night over Edinburgh spoiling the celestial display.

With the weather rollercoaster central Scotland was experiencing yesterday I held out little hope of even seeing, let along photographing 2 meetings of night sky objects last night. All afternoon the weather swung from heavy snow/hail showers to broken cloud and back again. As the twilight approached this was still the case so getting anything was going to take timing and a hefty dose of luck.

With this in mind, I set up the camera and tripod in the garden shed. This is the kit I’ve been using until I finally get my telescope. It’s a Nikon D7000, fitted with a Sigma 70-200mm f2.8 EX HSM and 2x tele converter which gives me a 400 f5.6 lens, 600mm on the Nikon crop sensor. The D7000 is fitted with a Hahnel Giga T Pro remote receiver so I can use the powerful IR remote to trigger the camera. Exposure delay mode is on the try and minimise any shake. At 400mm the slightest movement will be obvious, more so when the subject is many thousands of light years away. 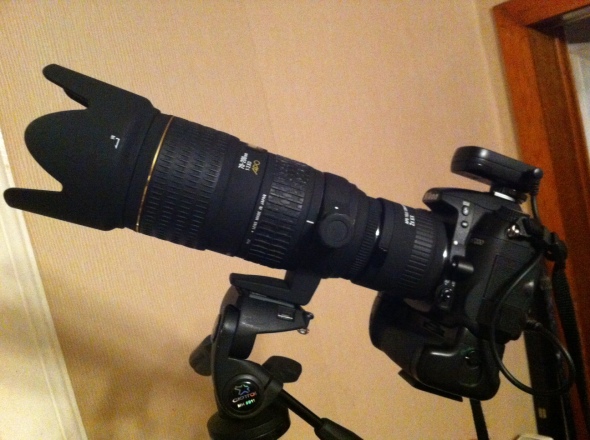 The first object to try for was the conjunction of the planet Venus and the Pleiades open star cluster, also known as M45 or the Seven Sisters. Venus has been steadily getting closer this month and on April 3rd it was sat right on the edge of the cluster to our view. 400mm fills the frame nicely and even though M45 wasn’t visible in the twilight sky, the camera could see it. There was just the small issue of the passing torrential hail shower to wait out first. As the dirty ominous clouds passed I got my first few shots at the target which was made difficult with a biting strong wind. 18″ long lens setups and strong winds don’t go too well together.

So, high ISO of 1600 and 1s exposure to try and keep the stars as dots rather than oblongs and the full 400mm was the order of the day. The wind affected a lot of shots but this was the pick of the bunch. Venus is of course very bright and the star cluster much dimmer, so I exposed for the stars and let Venus appear as an attractive starburst. Exposing for Venus would leave the stars not visible at all.

This shot was taken later on in the night with a darker sky and the 2x teleconverter removed to try and combat some of the “wind wobble”. ISO1600, 200mm and f5.6, 0.8s exposure time.

The 2nd object of the night was the close proximity of the Moon to Mars and the star Regulus forming a celestial triangle in the constellation of Leo. The clouds hadn’t parted at all over this part of the sky and it took a while to get any hope of photographing it. With the 2x tele removed due to the distance between the objects around 9.45pm the clouds moved and I got my first shot at the Moon. The final shot had to be a blend of 2 shots, one for the Moon and one for the planet and star. To expose for the very bright Moon left Mars and Regulus nearly invisible, to expose for Mars and Regulus burned out the moon totally and worse still caused huge lens flares.

As the clouds rolled over again the final shot of the night was a closer shot of the moon with the clouds looking all atmospheric. ISO800 at 400mm, f5.6 and 1/25th exposure time done the damage. It’s hard to get decent focus with clouds moving over the moon so I consider this a fairly lucky shot.

An enjoyable, if cold, night but hammers home the need for a telescope again, even just for tracking purposes it would be invaluable. I’ve pretty much decided on a Skywatcher Explorer 150p Newtonian on an EQ3-2 mount which I’ll fit with the optional motor drives. Hopefully I’ll have it soon when the real fun and steep learning curve will start.