Well, that was probably the most challenging night I’ve ever had shooting fireworks in Edinburgh. Fireworks are never particularly easy but add in a fairly brisk westerly breeze and it makes it even more of a challenge as the burst gets blown in the wind leading to nasty trails. Not the best but I got around it to an extent.

The location of choice for the 2012 Virgin Money Fireworks Concert at Edinburgh Castle was the old favourite of Blackford Hill. I went for Blackford over the Crags this year as with the wind coming from the west the smoke from the fireworks would drift towards the Crags but off to the South, Blackford would be fine.

Blackford has the added advantage of being flat onto the back of the Castle so you are shooting the bursts as they are, rather than through them which you do from Calton or the Crags. Inverleith is the same as Blackford but looks directly onto the Front of the Castle, arguably a better location but Blackford is higher too which I think helps.

The setup for this year was again 2 cameras on the go. The Nikon D7000 had a Nikon 18-200mm VRII on this year for some wider atmospheric shots and the D90 had the Sigma 70-200mm f2.8 for those closer in shots, both tripod mounted (obviously) and both with remotes attached. The D90 was set to high speed drive so with the remote engaged I could leave it to snap away while I manually triggered the D7000.

As I said earlier, the wind was a real issue. Any wind causes the fireworks trails to trail with the wind too leaving you with messy trails, the solution I used was to try and keep the exposures short, against the conventional way of shooting fireworks.

Most exposures I kept down to 1s or under, especially on the closer in shots, wider could stretch a bit longer and I wanted the lights from the city too. The upshot of this wasn’t the glowing long trails of usual shots but the shorter trails and quicker exposure combated the nasty drift from the wind. In this mode I was able to rattle off nearly 600 images from the 2 cameras which gave me plenty to cherry pick from to get the best. All in, not as good as previous years but I certainly handled the conditions better than I have on previous windy nights.

Just as an aside, I know the whole display was geared up to be viewed from Princes Street but a lot of Edinburgh watches it from other locations too. This 2012 display was pretty poor from any vantage point that didn’t look onto the front of the Castle. Long gaps of nothing visible, and I’m talking 5 minutes upwards was the order of the night and certainly not as good as previous years. I even missed the finale as there was a massive gap with nothing notable happening, not until I packed up and was halfway back to the car at least.

Roll on the Hogmanay fireworks and hopefully no wind!

You can view the whole set at: 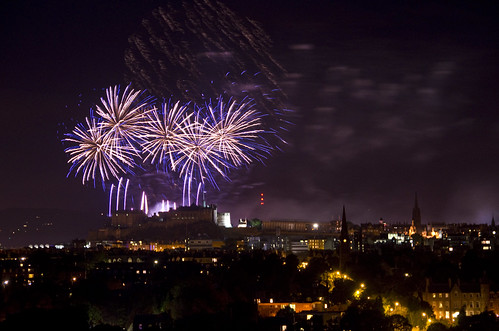 or even head over to Facebook to http://www.facebook.com/RealEdinburgh and hit the like button and see them there was well!

I even got the lead shot on BBC News this year too!